with a combined total of 79 years sharpening experience and a blademaster triple head machine, the staff at churchill rink have the knowledge, equipment and ability to sharpen your skates properly and to your liking!

Not too familiar with skate sharpening?  learn more about it by reading the information at the bottom of this page.

$7.00 per pair while you wait or drop off and pick-up later.

PLEASE DON'T RUSH IN 30 SECONDS BEFORE YOUR SKATE AND hope we'll have time TO DO THEM - WE ARE OFTEN BUSY DOING OTHER THINGS SO LAST MINUTE ISN'T Always a GOOD IDEA!

Sharpening is available whenever the rink is open and staffed but based on what's happening at the rink, you may need to be patient or leave and pick up later.  The rink is often staffed by just one person and if they're busy doing something time sensitive like driving the Zamboni, they won't be able to do your skates immediately.

During the winter season, the rink is typically open for skate sharpening on the following schedule. (NOTE-These are NOT our public skating hours.)

If you ever have an issue with how we sharpened your skates, or you like the job we did, please let us know!  We want you to be happy with the job we do.

The process of sharpening – how it works

If you’ve ever looked closely at the bottom of your skates, you may have noticed each blade has not one edge like a knife but two edges with a hollowed-out area in between. This shape is created by sharpening the blade with a precision grinding wheel with a rounded surface like the one we use here at Churchill Rink. Skates are clamped into a holder which when done right is then accurately aligned with the finishing wheel. The blade is gently passed along the spinning finishing wheel until the edges are sharp and the bottom is fully hollowed out.

Prior to the finishing wheel, it’s often a good idea for us to use the cross-grind wheel to prep the blade for finishing. Unlike the finishing wheel, the cross-grind wheel runs perpendicular to the skate blade and is designed to flatten the blade rather than sharpen it. It’s used to reset the blade to a blank state, ready to be re-finished. This step is not always necessary but is a great way to ensure the machine operator is starting fresh and removing any major defects such as a prior sharpening mistake or nicks. If you have your skates sharpened at the same place all the time, the operator will become familiar with you and know your skates were probably done correctly the last time. Operators who make mistakes tend to make the same mistakes over and over again and we see this every day!

There is one aspect of sharpening we can be customize for you here called “radius of hollow” or ROH. As mentioned earlier, sharpening your skates involves passing them over a spinning stone with a rounded surface. This surface can be modified to have a more curved surface or a flatter one. “Dressing” the wheel to the desired radius allows us to transfer a specific radius to your blades.

A larger radius means a flatter grinding wheel and a skate with less hollow. The normal range for hollow is 1/2” to 5/8” although larger or smaller hollows are occasionally preferred. Unless otherwise specified, we sharpen hockey skates and hybrid recreational skates at 1/2” ROH and Figure Skates at a 1” ROH.

GOALIE SKATES will be done as specified by the goalie as preference varies among them. In the old days, before the butterfly technique became the norm, goalies liked very flat skates so they could slide side to side without catching edges. These days, it's common for goalies to request a ½” or 5/8” radius which allows them better bite for pushing off while kneeling.

In the graphic below, you can see what the different ROH's look like.

Different hollows will affect how the skate feels and how it interacts with the ice. Deeper hollows will put more pressure on the edges of the blade and dig into the ice more. Shallow hollows will do the opposite distributing pressure more evenly across the width of the blades causing them to sit more on top of the ice.

How “radius of hollow” can affect your game

Major Sharpening “mistakes” and how to spot them

By mistakes I mean things the operator did wrong during a sharpening. There are two common mistakes that happen frequently for which the only solution is to get your skates re-sharpened.

Minor sharpening “mistakes” to watch for

These problems won’t make it impossible to skate but are worth knowing about. 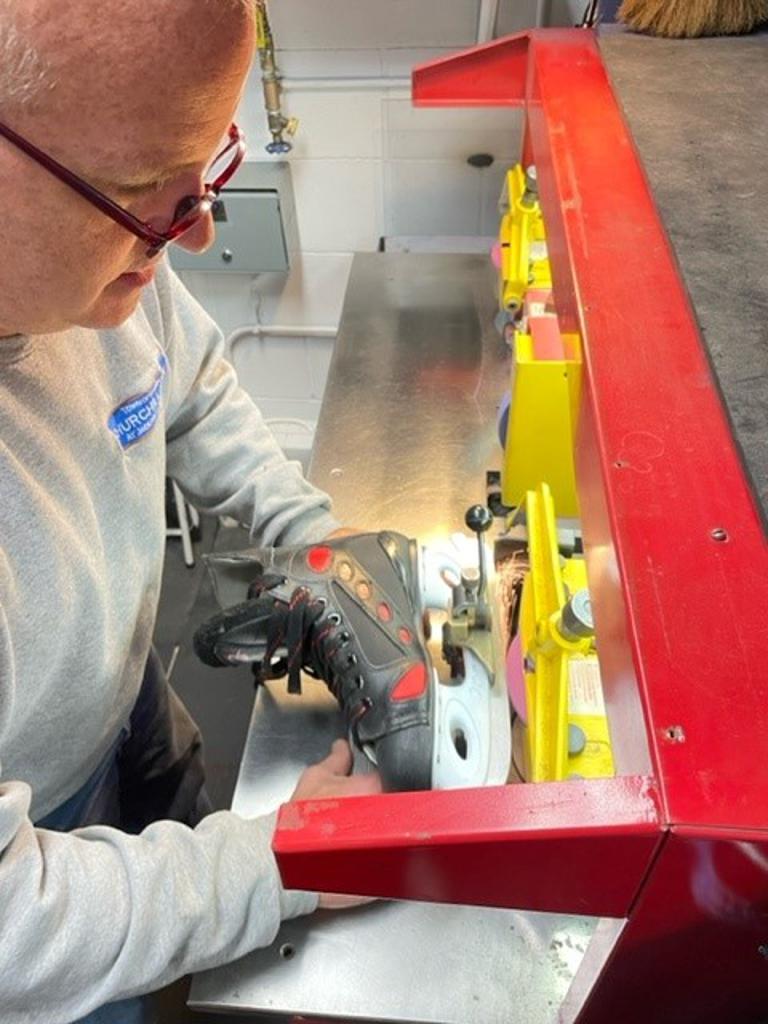